Hey everyone! I think this week's gonna be a long one. I just finished (er well, I'm about 3 hours from finishing and feel confident talking about) Persona 4 Golden on steam and Boy do I have Opinions. Album-wise, I didn't get into one specific album this week, so I'll be talking about one of my favorite albums from the late 80s, Dinosaur Jr's You're Living All Over Me. Hope you enjoy! 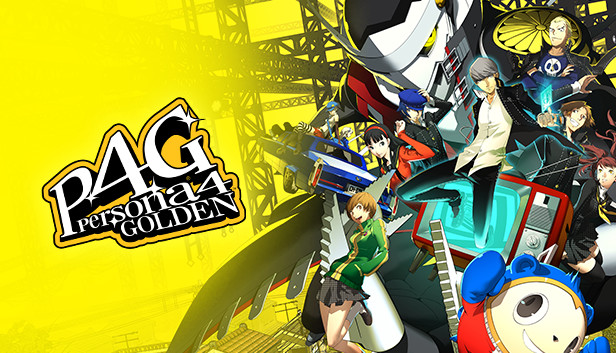 Get ready for some Somewhat Snooty Persona Opinions. I somehow spent 65 hours over the last week and a half playing this game, only a few weeks after playing Persona 3, and it's a very interesting game. Also a very very good game, so if that's all you wanted to know, you don't have to read the rest of this. Just go play the game, you'll have a good time, I promise.

Alright, first let's talk about the game itself. Persona 4 looks and plays almost exactly like it's predecessor, and that is not a bad thing. The dungeon crawling is well paced and atmospheric, especially in Heaven and the Hollow Forest. Most floors are randomly generated, but each dungeon has it's own little layout quirks, as well as some unique gimmicks to keep the gameplay varied. For example, one dungeon involves finding a key and backtracking a few floors, and another one has tiles on the floor that turn you around. None of the gimmicks are annoying (well, maybe one, but I'll get to that), and each dungeon really feels like it's own place.

The combat is mostly unchanged from Persona 3 as well, with some slight changes, like more of a focus on guarding, and, uh, buffing the buff spells a bit. Oh there is one big change from Persona 3 acutally: You can control your party members this time around. This definitely lends itself to having more strategy in battles, but comes with some small, hidden downsides. Overall it's not an especially challenging game, and experience is doled out enough to keep it from becoming grindy as well.

Now, onto things completely new in this game. The setting is fantastic! It's a pretty common sentiment, but it feels like the setting to JJBA Part 4, with maybe a dash of Twin Peaks in there (though that might be wishful thinking on my part lol). A wonderful little rural town, full of delightfully normal people, fearing the encroaching urbanization of the big city. The school feels run down just a bit, the shopping district feels just a little desperate as their profits get eaten up by the new department store, hell even the flood plains have a little bit of mud-ridden melancholy to them. It's a 10/10 setting with character and atmosphere for DAYS, and it's probably my favorite part about this game

The story is also just a bit reminiscent of JJBA Part 4, being half serial killer murder mystery, half slice of life anime. The story is paced out well, with a slow build until like 6 twists are thrown your way at the end, completely recontextualizing parts of the story (in the best way). All of the characters are believable and fun, even if some of them don't have as strong of an arc as I'd like (looking at you Chie). That actually kind of gets into one of my issues with the game, I never felt like there was enough time to do as much of the social links as I wanted to. Sure I got a good few maxed out, but there's definitely 5 or 6 I wanted to explore more, but I felt more strapped for time than in Persona 3. On top of that, I think the links I did focus on first happened to be some of the weaker ones, which also happen to be the ones for the main party I used (Yosuke, Chie, Yukiko), which honestly is kind of my own fault, but their social links make them much stronger in battle so it felt necessary? To me, at least.

Moving on from the main game, I played the Golden version of the game on Steam, and that has it's own set of changes to reckon with. First of all, running the game on my bootcamped mac was a pain. There's a bug (probably an antipiracy feature) where the game needs to be installed on your C drive for sound to work, except it gets reversed on bootcamp for some reason. There's a workaround I used, but if this really is an antipiracy feature it's one of the most bizarre ones I've seen, really more annoying than anything. Once you get that sorted though, the game is beautiful! It's in HD, which is only possible with emulation for the original version, and it really brings out the nice details in everything, even if I could kinda see the resolution of the textures on my TV. But the most important changes for this version (imo) are story changes

Golden introduces 2 new social links, Marie and Adachi, both of which I liked a lot. Adachi was one of the ones I missed out on maxing, and I plan on watching his on youtube. Marie was pretty good, one of the better ones in the game to my sensibilities, especially when you (spoilers) include her extra dungeon and the story with that. The atmosphere is great, the gimmick is really interesting, leading to the only dungeon where you aren't grinding for experience at all, even if it does become a bit of a slog during parts. It's capped off with a pretty easy bossfight, but the story beats around it expand on Marie's character in a really interesting thematic way. (end spoilers). Most of the other changes are pretty minor, or expand on the slice of life aspect of the game, which is cool but also kind of inconsequential, and kiiiiiiinda screws up the story's pacing at the end if you go for the true ending, as there's just a month with no real objective besides "make memories". I'd say overall it works, but just barely.

The final thing I want to do is compare the game to Persona 3. I played the FES version, which is analogous to the Golden version of Persona 4, in that it has extra content and minorly reworked gameplay. So let's compare these games on a few points: first, characters. I'd say I prefered the characters overall in 3. The party felt a little more believable in how they clashed with each other, and individually the characters felt more interesting? The social links feel the same way to me. In 3, the arcs the links follow are very strong and clear for the most part, while in 4 the arcs felt a bit more.. flat? I'd also say the story is a hair better paced in 3, although the story in 4 is altogether a fair bit better than 3's, with clearer stakes and a clearer antagonist. 4 improves on the gameplay in a lot of little ways that make it hard to go back to 3, with the dungeon design and direct control of your party being the most missed parts on returning to 3. I'd say the soundtracks are also equally as good, although the battle theme in 3 outclasses the battle theme in 4 by a nautical mile. Honestly both games are like near-perfect, with Persona 3 being a little clunkier and edgier, and Persona 4 being a little less personal and less self serious.

Also, just something I want to mention here is that this game feels like a remix of Persona 2 Innocent Sin in a lot of places, from the concept of a "collective unconsciousness" to shadow versions of the main party, to the prevalence of rumors in the main story (that's a mainstay in the series so far though, not unique here), which is really interesting and cool to see! Even if Persona 2's story outclasses pretty much anything on display here or anywhere else in the Persona series (unless 5 is really good but honestly I doubt it's story is gonna be better than 2's).

Anyways, I highly recommend Persona 4, especially with Golden being so cheap on Steam, alghough I'd say you can't go wrong with either version. Just make sure you play it if you like these kinds of games.

I'll keep this on the short side, since you just read my essay of a game review. You're Living All Over Me is an alt rock progenitor, a hugely important precursor to Grunge, and one of my favorite albums in this vein. The production is a little lofi, J. Mascis's vocals are rarely completely on pitch, and you can barely make out the different instruments when listening back, yet it all works.

The songwriting here is nothing short of breathtaking, with riffs that sound cool while also being real chord progressions, structures that take a pop template and twist it more than enough to make it interesting, and just amazing melodies, whether sung (rather endearingly) or strummed. There's a real sense of raw energy here, with spades of emotion-filled performance backing it. It's like the best parts of punk and emo mixed with the appeal to the masses that classic rock has, along with the guitar focus of classic rock.


Alright, I told you I'd keep the album review short! Thanks for reading, it means a lot to me. If you've got thoughts about either of these things make sure to let me know below, I'd love to hear some more opinions on Persona 4 especially! Next I'll be playing a few shorter games to space myself from the turn based rpg mindset for a bit, so expect a few more posts on here soon. After that it's right into Persona 5 Royal! Lol I should get back to work now, I spent WAY too long writing that. See ya next time!