Happy New Year!! Today I'll be talking about a game I liked a lot, the last(ish) game I played in 2020, and my second in a very long and very consistently good series of games. I think it'll be a nice boost of positivity to start off 2021! 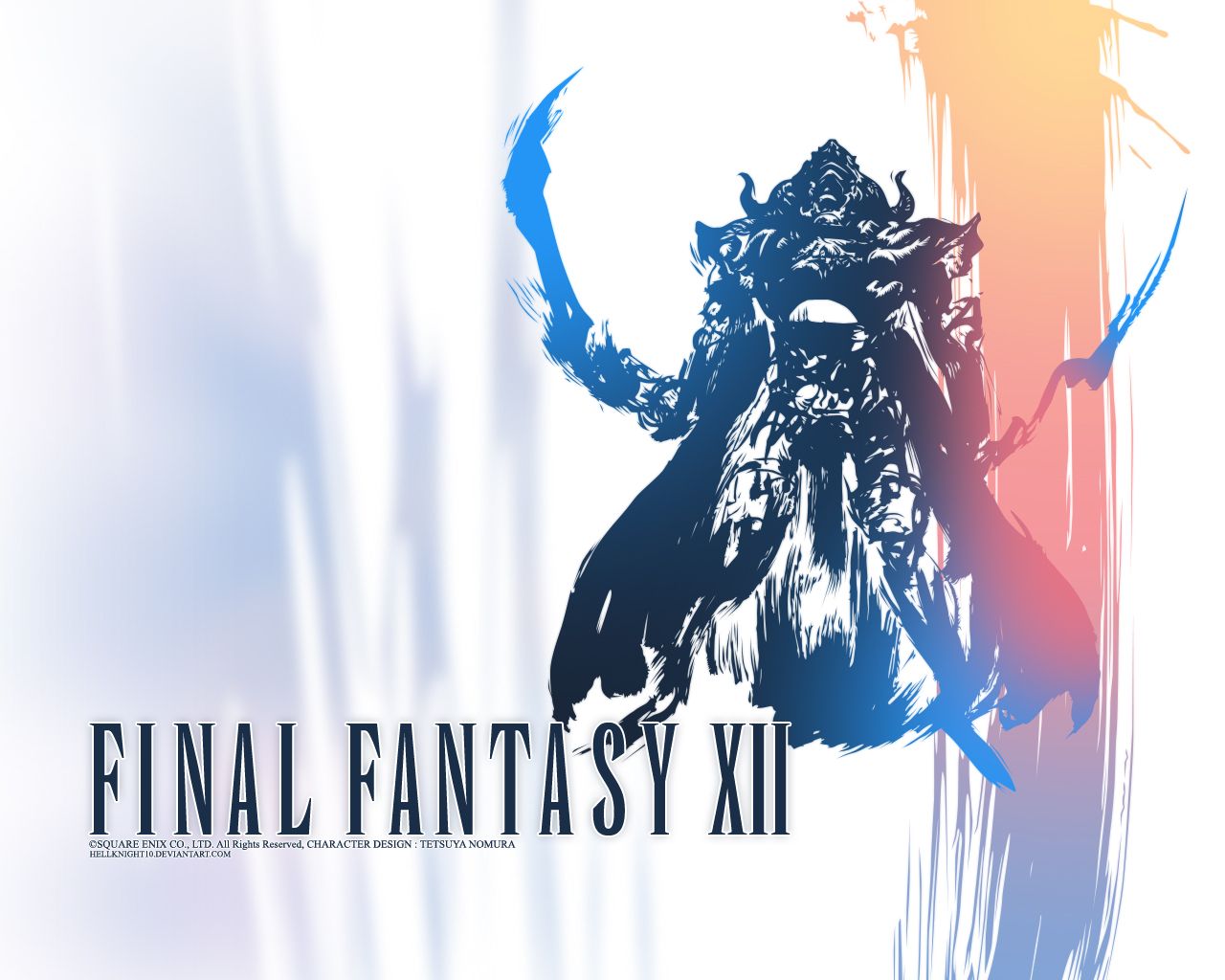 Final Fantasy is a series I’ve only recently given a chance, and I’m very glad I did. A few months ago I played XV, and to my surprise it wasn’t all medieval fantasy and feudalism, but it had some cool sci fi elements that really sucked me in (as well as some modern technology with the cars that I kinda hated aesthetically lol). Regardless, I had a good time with the game and wanted to start working my way through the series. Next on the list? Final Fantasy XII: The Zodiac Age. FFXII takes place in Ivalice, a setting that is equal parts fire emblem-style high fantasy, Star Wars prequel-style science fantasy, and Treasure Planet-style flying BOATS!! In other words, I think I dreamt this game up in 2008 without realizing someone had made it in 04. As the opening cutscene played, giving me a taste of the world the designers had created, I was already sucked in. Speaking of Star Wars, let’s get into the story (without spoilers)!

After a short tutorial mission, you begin the game as Vaan, a street urchin in the city of Rabanastre who aspires to be a Sky Pirate. Rabanastre is the capital of the kingdom of Dalmascus, which lost a war to the empire of Archadia 2 years prior. Now the city is occupied by the empire, with guards patrolling the streets and a new imperial consul taking control in the next few days.

After doing some errands to get you acquainted with the city, you decide to break into the palace treasury to steal Dalmascan treasure back from the empire. Once you get to the treasury however, you run into some real sky pirates doing the same thing as you. As they’re chasing you, a battle erupts outside the castle, and the three of you dip into the sewers to escape, where you run into someone else running from the guards, and presumably the battle as well.

In this prologue of sorts the main theme is coming of age, but as the game progresses that becomes less of a focus, replaced by political intrigue and large themes of how power corrupts and how a peace gained through the use of overwhelming force is not a stable peace at all. It feels rather critical of the Cold War, actually.

As the plot continues and the party grows, one thing becomes increasingly obvious: this is Star Wars! Vaan is Luke, the whiny young kid who dreams of leaving his home and stumbles into a massive war. The sky pirates, Balthier and _____, are Han and Chewbacca, lovable rogues of sometimes questionable loyalty to the anti-empire movement. There’s other characters who act as Leia (Ashe), Obi-Wan (Basch), Darth Vader (Gabranth), Palpatine (Vayne), hell there’s even a Death Star (though it doesn’t have as large a role in this story).

None of this feels bad, more like a deliberate homage than anything else, and the story’s structure and lore is rather divorced from anything in the Star Wars universe. On its own, the story is great, even if you feel more on the periphery of this war than really in the thick of it. But the story isn’t the only thing influenced by Star Wars... 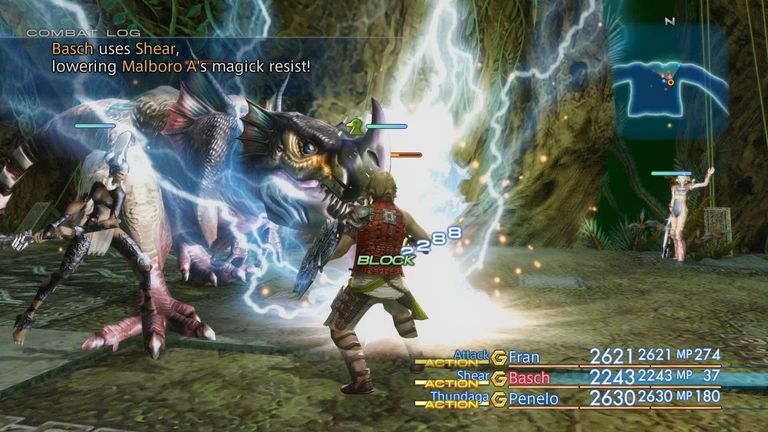 The first thing I thought to myself once I got the hang of the battle system in this game is “wow, this is the final fantasy version of kotor”. What I mean by that is the game has turn based combat that played out in real time. It’s similar to an mmo, except that you can pause combat to enter commands. If it had a queue system for commands it’d literally be kotor! On the surface at least. Kotor’s systems are dnd behind the scenes, while ffxii still feels like final fantasy under the hood, with different jobs (licenses in this game) and an elemental magic system.

Another interesting thing here is the gambit system, which essentially lets you program your teammates’ AI. You can have them heal a teammate who gets below 50% health, target an enemy attacking them, anything like that. The system has a lot of depth, but it’s limited in some frustrating ways as well, like how you can only have one condition on a certain gambit. Overall though, the combat works very well, and feels right at home if you like mmos or crpgs while still feeling like final fantasy.

Onto the structure of the game! Essentially you move city to city, and between each city, instead of an overworld, you move through very large, open areas. Just roaming around here fighting enemies is a joy, especially in this remaster where you can speed combat up (it can be a lil sluggish) and the environments pop in HD. All of the environments feel very well designed to get you where you want to go without getting you too lost.

This works very well for the main quest, but sidequests feel very out of the way. They’re definitely there, and at the beginning of the game you get started with the hunters guild, but beyond that first step it never feels like there’s a good time to sidequest, and most of them have limited narratives if any at all. This is the only real issue I have with this game

Going back to the Star Wars point I was making earlier, one of the most interesting parts of this game to me is all of the cultural exchange that had to occur over the last 50 years for it to exist. On one side, you’ve got Star Wars, which is a scienced up western reimagining of Akira Kurosawa’s The Hidden Fortress. Then Star Wars came back to Japan where it was mixed with high fantasy in so many final fantasy plots, this one just being the most obvious example. On the other side, you have DND coming to Japan mostly as video games like Wizardry and Ultima, getting adapted and simplified for game consoles. Mixing all of this together and you get any number of games, but somehow this game came out around the same time as Kotor, which has a direct line to dnd and Star Wars, yet both games came out very similarly. It’s all super interesting, and something I want to look into much much more. Maybe I’ll post about the parallel evolution of jrpgs and wrpgs sometime lol. All I can say for sure right now is that you should play this game. It’s fully realized in a way that most games arent. It feels complete while also hinting at an interesting history beyond the borders of this story. It’s a masterpiece of world building, with satisfying combat and narrative, and I can’t recommend it enough. Also balthier is best girl don’t @ me.


And there we go! Right now I'm in the middle of Persona 5, but don't necessarily expect that next week hahaha its long af. Here's to hoping this year is better than the last!