Nier Automata is one of my favorite games I've played in a long time. Er, maybe not actually that long. Definitely my favorite I've played since FFXII last year at least? Uh, anyways, it's a game I've been like half meaning to play for a bit now, saw it on gamepass, decided to try it while I have gamepass for the month, and played through the whole thing in three days. Do I have a problem? Maybe. Was it just that good? I'm not answering that. Read the first sentence again. Come on. 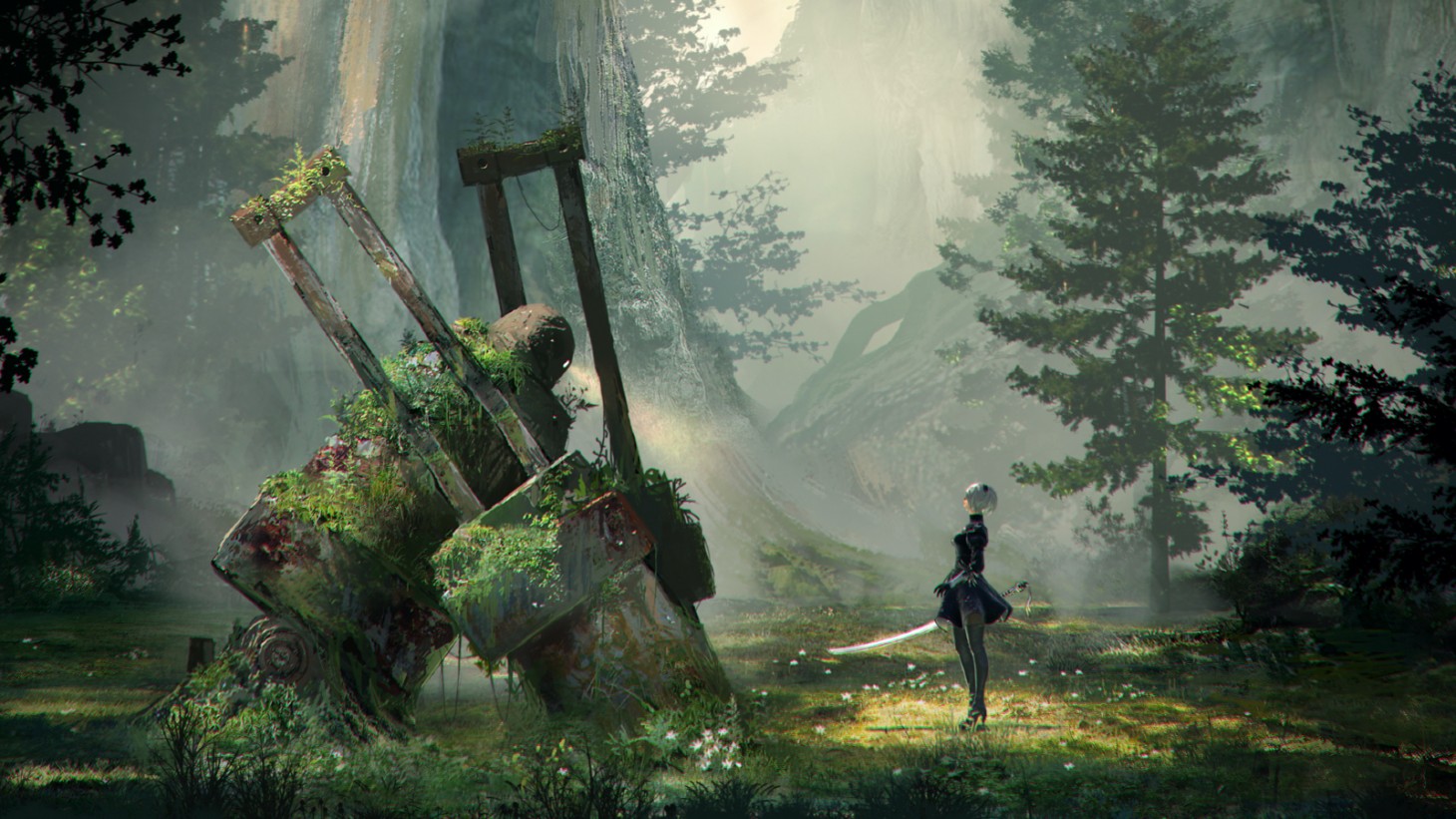 Nier is a type of game that has been my jam for a while now, a game who's themes are so baked into it's narrative and characters and design that it in fact becomes a game entirely about it's themes. For other examples, the mainline Shin Megami Tensei games (which are pretty much just Dante's Divine Comedy with evil pokemon), and pretty much anything Obsidian (or Interplay) has ever made (my favs are Planescape Torment and Knights of the Old Republic 2, which also happen to have 90% the same themes). Nier in particular is really good about making you empathize with the characters through gameplay, letting you feel like an anime robot death machine one second, and stripping it all away so you feel like a helpless, broken person. I don't want to dive too deep into the themes here, because you should experience them yourself, but if you like stories about looking at empathy and humanity from non-human perspectives, this is your game.

No, what I want to talk about is where this game fits into the video game market at large. Here is a game that is so confident in it's complex story and bizarre gameplay twists that whenever it takes every chance it gets to dive headfirst into the twists, rather than necessarily expanding on the "core" gameplay. It's an open world rpg, but it only has two quest hubs. It's a character action game made by the brilliant Platinum Games, but it does not care how well you play it. It's a twin stick shooter during most boss fights. It's all of these things and so many more, despite a small (for Triple A) budget, and it came out in 2017!! And it was super successful!!!! Sure there's the occasional big budget game that takes chances, but more and more fall by the wayside every year. Death Stranding was experimental. Dark Souls took chances, but FromSoftware has decided to hop rather than leap lately (which is fine for the record, those games are all very very good). Those are the ones I can think of off the top of my head, and I'm sure there's more, but it feels like most of the games industry wants to bank on known quantities and trends, at least gameplay-wise. Lower budget games, like Disco Elysium, tend to take more chances, especially if you look into the bedroom developed gems on Itch.io, but even the mid budget range lately has been dominated by ports and rereleases of old games. And again, they're not bad games!! Moon Remix's release on the switch introduced me to one of my favorite games ever, and a lot of translations of older games that never got localized are coming out, which I'm extremely pumped for! But you just don't really see that many games with the kind of confidence Nier Automata has combined with a budget beyond shoestring, or creativity to make it actually shocking and interesting.

This is gonna be my last post on this topic for a while, since I know I'm kind of beating a dead horse at this point, and I'm starting to sound like an old man I'm sure. The bottom line for me is that I want more games to feel like art rather than product. There's space for both in the market for sure, not everything should be a Lynchian psychodrama, but like... some things should be? Even if they don't turn out amazing. And as people interested in this medium as a form of artistic expression, I believe we should support all games sporting the confidence of Nier Automata just as fervently, instead of buying the next big game from whatever series by default. You should never buy something by default. That's just the publishers controlling the narrative, making it seem like the default is the purchase of every new Battle Royale game, or whatever trend comes next.

Alright I'm done, thanks for reading my rant lol. Have a good week everyone! <3