Hey, this is a guest post(!) from one of my best friends and college roommate Xylon73 (Xylo for short, but only on the internet). He's a dope guy with cool taste in games and a very different perspective from me. Hope you guys like it, cuz I wanna have more guest posts from my buds in the future. They're all so awesome!! Anyways, on with the show!

XENOGEARS. It is done! My most recent undertaking has been one of the most unique jrpg experiences ive had in a long while. This thread will be spoiler free and only lightly tough on the themes and characters, so take a look if your interested! 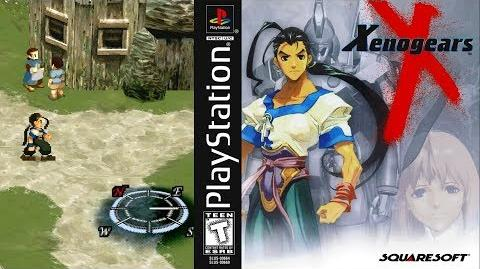 This game was a fucking ride man. Ill get the lackluster parts out of the way, if you know anything about this game you know its unfinished. Its very clear the team at square KNEW how to make a jrpg, the battle system, environments, presentation, theres nothing in this game thats BAD. they just did not have the time, resources, and direction (more on that later) to capitalize on those talents. Thus, many aspects of the game, combat, dungeons, and pacing, are boring at best, and aggrivating at worst. I can say for sure i would have not enjoyed this game nearly as much without relying on a walkthrough.

To speak on the pacing a little more, the game has two very uneven halves, disc 1 and disc 2, with 1 being a traditional jrpg thats story is poorly paced, and 2 being almost a visual novel with its story paced waaaay to fast. So from this, you would think I hated this game right? Couldn't be further from the truth.

I would do it all over again for the impact and themes this story presents. While the pacing needed more time in the oven, and a LOT of aspects of the story needed smoothing out or more attention (ie. the villains, any character that isnt fei or elly), the core of the game shines as bright as the bigass explosion that caps the game off.

Elly and Fei's story is masterful, for all the depth and complexity it executes so well. From surface level elements to deeper psychological connections, this is easily one of the best love stories in fiction ive personally experienced.

And on the theme side, this game really does have a lot of interesting ideas to say and execute, involving the consciousness, trauma, recovery, love, faith, and what it means to be human, and to live proudly. This isnt a game where u roleplay as a character and live in the world to escape. This is a game where u act out scenarios and grapple with what the game wants you to think about (when its not slogging you through filler that is).

And this is where i want to bring it back to the development. I physically felt bad for the crew working on this game, i could see where they wanted to go further, wanted to do more, wanted to make the game part much better, but ended up coming short. Due to many reasons, but primarily i think, the direction.

There is so much unneeded content, so many parts of the game that could have been smoothed over to have better pacing. I have no idea how much time these actually took, but there are some random minigames, one of which is a TEKKEN CLONE, random sidequests, random areas, random sections of the game that take too long. These are all failures of the management of the game, that with proper planning a more cohesive experience could have been created under the circumstances. Let me be clear, i am absolutely not blaming all of this on tetsuya takahashi, monolith soft is my favorite development studio and this game has only increased my love for them. He was handed a shitty situation and did what he could. But i know now especially, he can do better.

In some ways tho, how this game came out is almost poetic. One of the core themes is learning to not force both blame and comfort onto others, dont blame others for your own actions, and dont seek only comfort from others and call it love. Thats why i bring up this direction choice, even with the circumstances, the failures of the game are the fault of the game itself. And yet it stands tall as a cult classic with a stellar thematic core, shining through its flaws to those who see it through. And i think thats beautiful.

So. Should you experience this for yourself? If you think its up ur alley, absolutely. Please find some way to genuinely experience this game. If you just cant get through it i understand, maybe a lets play or an in depth plot synopsis, some way to truly sit down and meet the games on your own terms.

I want to give a huge shoutout to crimson2877 for letting me borrow his blog for this. I wanted to put this directly to twitter, but it QUICKLY became way more than twitter could handle, and this was a great back up. Speaking of twitter, heres mine! @Xylon7373 Gimme a follow once in a blue moon i tweet about cool jrpgs I finish. Thanks for reading!