I'm not sure if you can tell, on the other side of the blog, but I haven't been playing games quite as frequently or fervently as I was a few months ago. There's no specific reason for this, aside from a slight feeling of burning out on them a bit. But that's why I've been a little spotty with posting lately? I definitely want to get back to posting weekly, but if you're jonesing for more of my Content, you can check out my GG account (linked in my about page) where I have a bunch of short reviews of every game I've played for the past few months. A little less thinkpiecy than what I write here, but still pretty good if I do say so myself. Alright, on with the show!

Lately I've been gravitating towards more text-heavy games. You know, like visual novels, or "walking simulators", or any number of cool experimental artsy indie games. I'm not sure why, maybe I'm just on my way to getting back into reading books. Whatever the reason, they've got me thinking about narrative structure today. Specifically the similarities and contrasts between how 13 Sentinels: Aegis Rim and Beeswing approach their narratives and follow through on them.

So first I'll talk about 13 Sentinels. I finished this about a week and a half ago, and the entire time I was playing it my mind was being BLOWN every FIFTEEN MINUTES! Basically, the game has 13 protagonists. Each one has their own visual novel/adventure game set of story missions, and each protagonist's story intersects with as many of the other ones as it can. On top of that, in pretty much every chapter of the game, there's a new revelation about the setting, or the characters, or both. Sometimes it's minor, but more often than not it's a world upending reveal, and it ends up as a really interesting structure.

Mostly it really helps with pacing? Like, you couldn't have a more traditionally structured narrative in a game with 13 different storylines that weave in and out of each other, with no real order between them, so the soap opera-style plot revelations and cliffhangers during each chapter do a good job of keeping things exciting. Even with the help that provides, the way this game is written boggles my mind (how does it alternate lulls and excitement so well?????), but it's definitely something they use to keep you coming back. But what's extra strange here is that it has these revelations in place of a more traditional narrative, not just supplementing. The story is the twists. And so when you get to the end and you look back, it's kind of hard to quite figure out exactly what happened at what time, but while you're playing it feels like you're unraveling the tangled ball of yarn it calls a story, and it all just kinda makes sense. In that way it almost reminds me of some more experimental movies, where it's less about a plot you can follow and more about how you feel while you're playing. 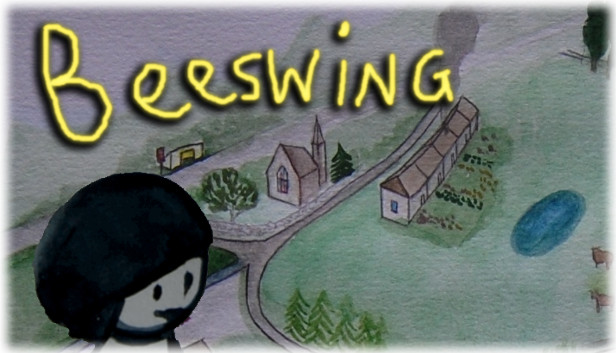 That actually brings me right to Beeswing, which feels like the true equivalent of experimental movies in video game form. Here, there really isn't a plot, so much as a place to explore. The framing, going to sleep and dreaming about the town the dev grew up in (I assume), gives way to his mother telling him "Why don't you go say hi to the neighbors?" and from there you're free to explore, reminisce, and engage with the town of Beeswing. It's got a surreal, dreamlike tone, that really works to bring forth a sense of nostalgia. Not a nostalgia where you miss the "old days", but one where you're just experiencing your memories as parts of places you've been.

But back to narrative construction, both of these games use a freeform structure to tell what they want to tell, and to get at something about the setting, the truths it holds. In Sentinels, that truth is an upheaval of the world around you, that it was all a facade you had bought into, and now it's time to live your real life. It's a coming of age story in a way. By contrast, Beeswing's truth is rooted in memories and dreams. Is it true? Doesn't matter. What does matter is whether it feels true, and the meaning that feeling describes. It's not a coming of age story, its a collection of vignettes told by someone who came of age a while ago, revisiting the times and places from when they hadn't yet.

I'm not entirely sure this was more than an incoherent ramble, honestly, but somehow that feels right. A more freeform post, for more freeform games. It doesn't really have to be structured, it can be whatever I'd like it to be, and the meaning of that is all the meaning I really need. Thanks for reading everyone. I heavily recommend both of these games, especially Beeswing since it's got a free web version, but if you have a PS4 or 5, 13 Sentinels is also a must. I hope you all have a good week, and I'll see you all when I post again :)