SORRY IT'S BEEN SO LONG!!! I started working at the office again recently and it kinda threw off my blogging schedule even more than it already was hahaha, but anywaysssss,,,,

I know I said my next post would be an SMT retrospective, but I'm thinking of putting that one out closer to the release of SMT 5 honestly (which I preordered the collector's edition of HELL YEAH). So instead... 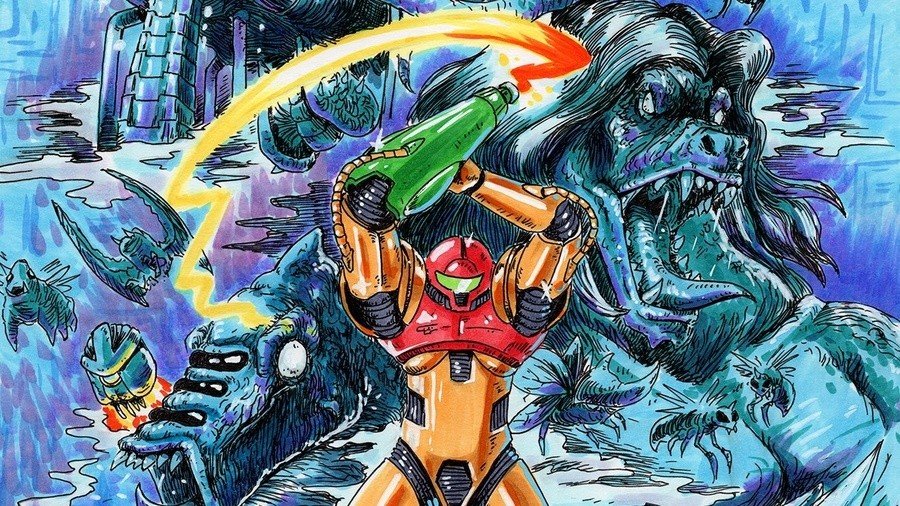 Yeah so this is my first post since E3 and the main thing I did after E3 was play every 2D metroid game. Technically I'm still in the midst of the original (it's great to play during meetings hehe) and I've gotta borrow Samus Returns from my buddy soon, but I played all the other ones!! Yes, including the original Metroid II and AM2R. Also I didn't finish the last bit of Zero Mission because I did that the first time I played it and it just got kinda frustrating this time around :(.

Right, so I've got a couple hot takes here, but the first thing I wanna say is holy hell all these games are good. Even the original (tho it's far and away my least fav for it's difficulty). Really the only one that's a pure great example of the Metroidvania design is Super Metroid, and mayyyybe Metroid also, though it's really just got the same structure as the original zelda. All the other ones are linear in some way, with more minor exploration, and they're all super super different from each other, in art, atmosphere, and themes. It's what made playing all of these back to back not only tolerable but actually very interesting!

Now, the reason that so many of these games are more linear, as far as I can tell, is because the series mostly takes place on portable systems. In fact, only 2 out of 7 games (and 8 if you include Dread, the reason I played these all right now) are on home consoles. Even AM2R is on PC only, so I don't really count that as either camp. But yeah, it's a largely portable series, and the thing with portable games is that they often (especially nintendo ones) have a different design philosophy than console games. You need to be able to pick them up, have some fun, and put them down. No paper maps, no getting lost in a massive world, just a bite-sized version of the console experience for the train to work.

So metroid 2 has 8 or 9 mini-Metroidvania zones, where you'll find one or two powerups and get through a couple obstacles, and then be able to save and shut down. Both of it's remakes stick to this design, but they do expand the areas a bit. Zero Mission and Fusion have a waypoint system, where they'll mark on your map where you need to go, and leave it up to you how to get there. Zero Mission is more Metroidvania-ey in this respect, being based off the original game, and as such has a lot more places to get lost, or blockers in your way, but Fusion is very clear about where you're going and, when it wants to be, how to get there.

None of this is bad!!! Honestly I think it's helped these games age well, and stay distant from the indie Metroidvania scene that's dominated for the last few years. It also leads to my possible my biggest hot take ever: The original Metroid II is the best game in the series

Yeah that's right. I'm a crazy person. There's a billion things I could say as to why, but I already wrote a review of it on my GG page so I'll just link that here. Broadly, it's got more atmosphere and considered design than all the other games in the series combined (except maybe Super) in my opinion. Btw, after that one, my ranking is Super Metroid, AM2R, Fusion, Zero Mission. I'll explain it quickly: Super Metroid has absurdly tight pacing, AM2R has great boss fights and *feels* nicer to play than the original, Fusion has a really cool setup as a direct spiritual successor to the themes explored in Metroid II but doesn't execute as well imo, and Zero Mission is a great starting point but feels kinda limp after the other ones.

Anyways, that's a lot of what I wanted to say. Idk if this article is super super interesting or just feels like me spouting metroid facts honestly hahaha. They're all great games, and despite my hot take uh don't play Metroid II first. Play Zero Mission first. ALso can someone please make a map romhack for Metroid II? That'd make it perfect (well maybe make the save stations refill your health and missles too but yeah that's about it).

I'm thinking about getting into other metroidvanias soon enough, stuff like Symphony of the Night, Harmony of Dissonance, Metroid Prime, maybe even Axiom Verge and Carrion from the indie scene, though I just started another CRPG binge so it might be a hot minute lmao.

Thanks for reading!! IF you've got any opinions on metroid, comment below!! And have a good day :)