But that doesn't mean I don't like em. Kinda wish I didn't tho. 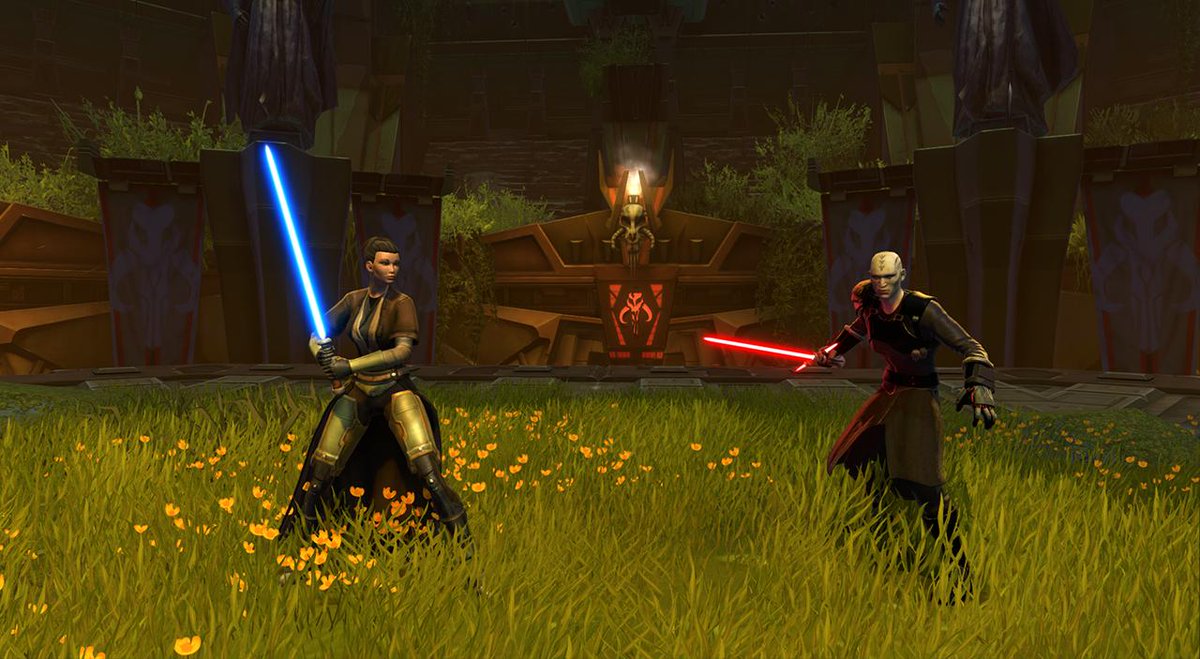 I've been playing various MMOs for most of my life now, albeit with large gaps between the times I really got into them. The first one I got into, if I remember correctly, was Star Wars: The Old Republic, since I was such a big fan of KOTOR and KOTOR II. Hell I was so hyped I got into the beta! Being a huge fan of the Darth Bane books as a kid, I went for Sith Juggernaut as my class for the beta (and the first couple of times I played through a character's story). I got to be this extremely thick dude with a mean look on his face and almost kind ideals in my heart, since I can never bring myself to play a dark side character.

Now, despite playing what I didn't realize at the time was a Tank class, I never got into the online play in the game. A lot of people who're into that sorta thing didn't get so into it either in SWTOR, and that's mostly because at the beginning there wasn't a huge amount of good multiplayer content, but I didn't care about that. In fact, I didn't care about the online play aspect at all! It was just a bunch of planets where I could run through a fairly well plotted storyline and soak in the aesthetic of a universe I loved. Hell, the "world" of star wars has always been my favorite thing about it. The dilapidated smuggler's dens, the lush forests, the ornate palaces, everything I loved about the Original Trilogy and the Prequels was here, along with cool references to my favorite Expanded Universe properties, and just heaps of lore. Twisty, overwritten, dense to the point of collapsing in on itself lore, and I loved all of it. To this day, SWTOR is the only MMO I've really been able to get into,

That's not to say I didn't try others though. I've downloaded and played the opening hours of so many 2010s MMOs, from Guild Wars 2 to Elder Scolls Online to, uh, a bunch of other ones that weren't unique enough to make an impact on me. I played a good bit of World of Warcraft, but it was so similar to SWTOR in the gameplay department, and the main tradeoff was SWTOR's singleplayer story focus vs WoW's multiplayer focus, and I don't really care for multiplayer. Right now I'm playing Destiny 2, which has a pretty poorly plotted storyline in every aspect I've tried, and a lot of major issues with the flow of quests, in that they don't flow together at all, you just take quests and if you want to start a campaign you select it from the menu. It's not my favorite game to be sure, but the shooting is reallllllly nice, so it's been a good stress reliever lately.

What I'm saying is I've played a lot of MMOs in my life. I'm familiar with the systems common to the genre, and hoooo boy those systems have wormed their way into a lot of games in the last ten years. Maybe you're familiar with "Service" games? Games taking a Software as a Service (SaaS) frame towards making money, with subscription fees, lootboxes, in game currency, paid content expansions (especially ones that lock you out of most of the game if you don't get them), daily/weekly/monthly challenges, all things designed to get you to log into a game every day, to keep that sub fee renewing. Even games without subscriptions, like Destiny or Fallout 76, still try to monopolize your time and attention. You don't have time to play other games, so you might as well pay money for limited edition unlocks and good gear. It'll make the game more fun!

Fortnite is one of the more egregious examples of MMO-style systems in a non-MMO game. Not necessarily because it's any more predatory than the average, but because it's become such a monolith that these systems have taken hold of a number of people surpassing WoW at it's height. If you've ever had to break away from these systems, you know how addicting they can be. These games are perfectly tuned to extract as much money and time from you as they can, and then to keep going, draining you until you break out. At least the games don't stay popular forever, as content changes and players start to leave, an avalanche can follow, reducing the playerbase to those with the disposable income to handle the game, or the people who are so deep in that leaving now would mean throwing away literal years and thousands of dollars. They seem to be between trend and addiction, and the group mentality behind trends can get you unhooked from a specific game. But the addiction means you're more than likely to just dive headfirst into another similar game.

Honestly it's reprehensible that Service games are becoming so widespread. They are capitalism inserting itself directly into the medium of games without any attempt to disguise itself. Monetizing social interaction and monopolizing free time for profit's sake. These games can have a drastic effect on your mental health, and really they're designed to. People who can't have social interactions in real life because of depression or addiction or any other effect these games can cause stay in the house more, putting more and more time into these monoliths.

And I hate that I like these games. I don't think I've played on that I'd say is a fully soundly designed game (Maybe Planetside 2?) but they really do give a unique kind of experience. Well, Service games don't necessarily, but MMOs like SWTOR or WoW do for sure. The locations and atmosphere just feel really nice to me, particularly when they're part of a world I can really sink my teeth into. But they're fast food. Designed to be almost satisfying, but leave you craving. I've mostly moved to playing these "Fake MMOs", i.e. single player games that use MMO-style systems and scale but without the recurring monetary cost, or the objectives that renew, or the multiplayer side at all. But even with all these downsides, I still started Destiny 2 (for the second time) last week. I'm probably gonna fall off of it soon, since there's not very much meat on the game outside of the combat and the level design. I've got my favorite Halo game, ODST, for that if I really need it, plus the story in that games is actually rather well done. But I still feel the desire to come back to SWTOR and play through the Imperial Agent campaign every couple months.

Honestly, as service mechanics become more harder to avoid, I'll probably end up going back to some old favorites in the genre. I want to say there's nothing wrong with that, that you can enjoy these games if you keep the predatory context of the mechanics on your mind, but that's like saying you're immune to propaganda: You're not. So I'm gonna try my best to stay away from service games, instead going for games that give me the same things but aren't (as) predatory. Like KOTOR instad of SWTOR, or Morrowind instead of Elder Scrolls Online, or Halo 3/ODST/Reach instead of Destiny. The list goes on. For every MMO, there's a single player game that's more well done in the single player department. If I do come back to an MMO, I'll try to make it SWTOR just because I know the game pretty well, and I'll try to do it with friends, because otherwise it's not worth my time or my money.