A few weeks ago I played massively popular and slightly embarrasing indie rpg/anti-rpg/bullet hell dating sim Undertale. Now, it's one of those games that was an instant classic when it came out, and as such it's been beyond dissected for a more than complete understanding of it's meanings, gameplay, and anything else that it had or didn't have to offer. For a good video about it, check this video out. But anyways, I don't have an interest in trying to squeeze my own interpretation out of it. What I do want to talk about is some games that influenced my favorite parts of Undertale, and how much more I like them :) 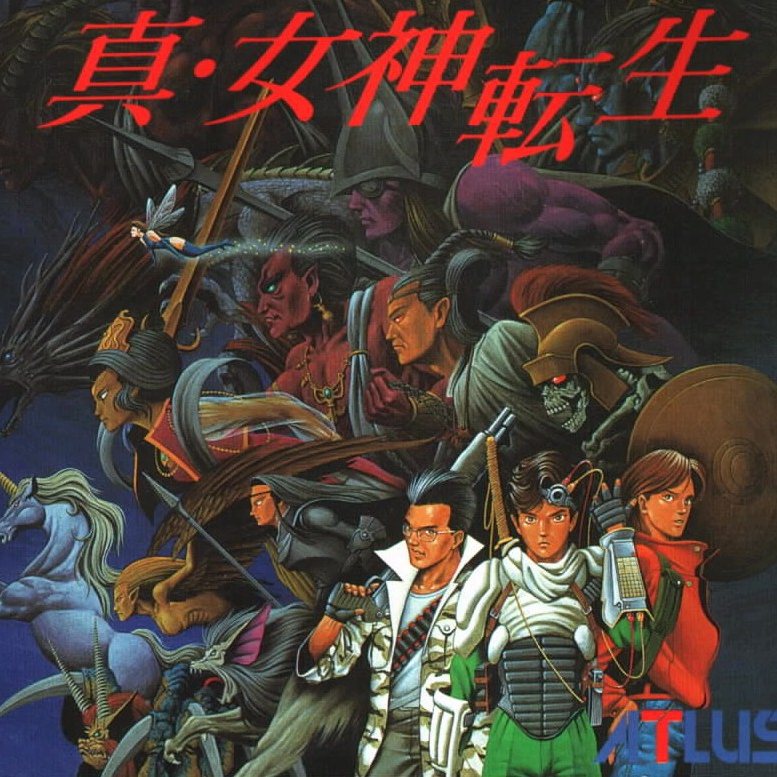 So the first game I wanna point out isn't as much of an unknown quantity as it used to be: Shin Megami Tensei. The games where you collect demons like pokemon, but by talking to them, and eventually have to pick a side between Law, Neutral, and Chaos. Now, obviously this series' western notoriety is largely due to it's spinoff series Persona, a series that dropped the first element around its third entry, only getting it back in its fifth, and dropped the second element in the first game and never looked back. So I'll mostly be focusing on the mainline SMT games here, and mostly the first one tbh (even though it's my least fav mainline one lol, it just has the most in common with Undertale imo)

Anyways like I said, SMT's main feature is the conversations you have with the demons. These can be very long and frustrating on your first time talking to a particular demon, but as you keep trying (and with an encounter rate like SMT 1 you pretty much have to), you eventually get to know how each one usually acts and how to get what you want out of them. Granted, it's never a sure thing. There's a bit of randomness in the system, so sometimes a demon says something different, or reacts poorly to something it usually would've liked. I Love the conversations in SMT 1. They're unpredictable enough to feel like you're having a (primitive facsimile of) a real conversation with a real, uh, demon i guess. They have personalities, little quirks, sometimes they tell you to break a rock with your bare hand, they're my friends!

What I'm getting at I guess is that the conversations in SMT are unpredictable and chaotic in a really really good way. In comparison, let's look at Undertale. You can talk to the monsters, and if you knew anything about the game before you played it, are encouraged to either end battles exclusively through talking, or exclusively through fighting. Now when you're talking to the monsters, you get a list of options depending on what kind of monster it is. You don't really converse with them like in SMT, instead it's a little more abstract or action based, i.e. when youre fighting a dog enemy you can go up to them and pet them. It's kind of shallow as a mechanic who's inspiration very obviously came from SMT, but broadly I think this simplification was necessary if it was gonna be possible/encouraged for it to be your only method of getting through the game. That being said, I don't like how it's implemented in the bossfights.

The bossfights in SMT are not fights where you can talk to the demons. They're just long fights against big tough demons that can be liable to make you tear your hair out (if you're not using a guide, which for the early games you should. In Undertale however, you're able to talk to and spare the bosses. What this means usually is just dodging their attacks for a set amount of turns until they just kinda give up. There's two fights that break this mold, and they're way more engaging for it, but broadly it turns the game into a pure bullet hell that you end up replaying again and again and again as it get harder and harder to reach that turn where the boss is just like "ok i guess i'm done now". I'm definitely exaggerating a bit, but these boss fights were far and away my least favorite part of the game, and I think it comes from how it's kind of weird to make a boss fight that's just a conversation? but I personally would've also loved it so obviously I'm right. Wow that was a bit longer than I meant it to be, let's see how this part pans out! The next game I wanna talk about in relation to Undertale is a game I've already talked about on this blog, Moon Remix RPG Adventure. You know how I called Undertale an anti-rpg earlier? Well here's where it gets that from. I'll try not to repeat myself too much, but if you haven't read my other post about it, Moon is an old PSX game created by the short-lived developer Love-de-lic. Love-de-lic's employees would split the company up after just a few games and start making games like Chibi Robo, Captain Rainbow, Chulip, and a billion other games that all start their lineage right here. Moon is a satire of JRPGs, most specifically Dragon Quest, and also a critique of how often combat is used as the default method of interacting with a world in most video games.

It's an adventure game at it's core, where you have to find love in the world in order to level up. Generally, you do this by finding the spirits of animals that have been murdered by the trad JRPG protagonist of the world and returning them to their corpses. It's a bright, hopeful game, with a very heavy undercurrent of sadness right beneath the surface. It's a game about helping people, pacifism, taking in your surroundings to their fullest extent, and appreciating what you have. I've never played anything else quite like it, and despite the frustrations I have with it (adventure games are so annoying without a guide, and this is no exception) it's also one of my favorite games of all time. SMT might've inspired its conversations, but Moon inspired Undertale's heart.

Now, in Undertale you're not saving the monsters, you're just sparing them. They're at your mercy. This is a core theme of Undertale, the idea that killing is a choice, one that gets easier as you do it more and more, and you have to be the one to choose not to. You still help plenty of people in Undertale, but it's much more focused on the choices you make and how they affect a small but well realized cast of characters. This might be a small change in framing, and I do appreciate Undertale's message of "Be a good person, you're the only person who can make that choice for yourself", but I can't help but feel like Moon's idea of this message, namely "Helping people is it's own reward" is more effective at communicating the same heart.

In Moon, you don't get a choice. You were put in here to help these little cute clay animals find peace, and to help these bizarre characters find their love. It's not a game where you make a choice to help people, it's a game where it's just what you do, and I think that's an important distinction. In Undertale you always have the option to fight, like a temptation staring at you that you have to resist, while in Moon it's not even on your radar. Moon rejects combat as an answer, Undertale just shames you for it. And while shame is one way to teach a lesson, I prefer the positive reinforcement Moon provides.

Alright, that's all I've gotta say today. Regardless of all of this, I still think Undertale is a great game. Personally, I feel like the world is a little flat, the characters aren't quite my thing, and the bullet hell gameplay is frustrating, but those are all nitpicky and very possibly could be your favorite things about Undertale (not that you like flat worlds but you like Undertale's world.). Anyways I'll see you all next week!